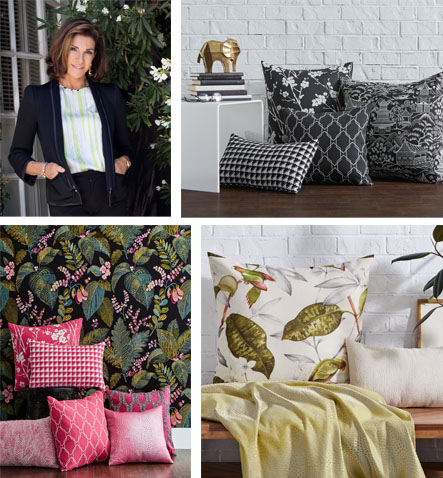 Introducing the Love It Collection, by Hilary Farr.  The Love It Collection, Covington’s introductory collection with Hilary Farr, is an eclectic and artistic mixture of prints, woven textures, jacquards and embroideries.  The collection features an assortment of color combinations, from sophisticated neutrals and greys to classic navy and white to fresh fuchsia and black and white combinations.  Inspired by Hilary’s love of nature, the arts and culture, the patterns work on their own or can coordinate together for complete room settings.

Hilary Farr is the internationally renowned designer and star of HGTV’s Love It or List It, a smash hit-show now entering its twelfth successful year. Born in Toronto, the designer, businesswoman, television host and actress grew up in London, where her education was split between academia and art, dance and drama. She has appeared on the London West End stage and on Broadway, and a has a number of television show appearances to her credit.

A socially conscious citizen of the globe who inherited her Mother’s passion for art and decorating, Hilary bought, renovated and sold her first apartment at the age of 18 and has never stopped wanting to create beauty out of sad and tired spaces. While working in television in Los Angeles, friends and colleagues continually noted her innate Brit Chic aesthetic and she eventually designed and renovated homes for a number of notable celebrities before launching her own design/build company in Toronto. There, she is credited with being the first designer to stage homes prior to sale in the cosmopolitan city and her client base grew and grew.

Farr was tapped for Love It or List It in 2008 and hasn’t looked back since. She regularly appears as a guest on leading news and talk shows and contributes to design publications in both the U.S. and Canada. Now, the wildly popular designer is turning her talented eye to product design with the launch of Hilary Farr Designs, proving she can not only work renovation magic on tired spaces, but actually bring them to life in an entirely new universe of collections for the home.